You are British – or are you? Get additional confirmation that your roots are truly British by carrying out a British DNA test. This ultimate test in the field of DNA testing for origins will help uncover the epic journey of your ancient ancestors, many thousands of years back, from their origins to the British shore.

Postal and Delivery times are constantly changing. Whilst every effort is made to reduce time where possible this cannot always be achieved due to actions outside our control. The times quoted are from the time the final sample is received.

Our British DNA test will delve into the parts of your ancestry that are hidden inside your DNA and uncover the genetic heritage left to you by your ancestors. The test is offered starting at only XXXX with results in 12-14 weeks from when we receive your samples.

5 different parts to your British Ancestry

Results are ready in 12-14 weeks. Note that the price of the women’s test is reduced as you receive one less result than men.

Your motherline and fatherline are two of the most significant and interesting parts of your ancestral roots. We could say that we have some of our DNA which is paternally inherited and only passed from a father to his male children – paternally inherited genetic information is found on the Y chromosome. We have another type of DNA which both males and females carry but which only females can pass on to their male and female children. This maternally inherited DNA is called mitochondrial DNA (MtDNA) and can be used to trace your maternal line. Both the Y chromosome and MtDNA carry information about your ancient maternal and paternal roots and each can tell a story. 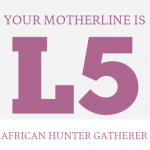 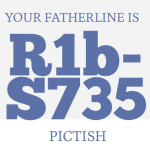 Using Y chromosome markers: By identifying DNA markers (specific DNA variations of which inheritance can be traced) using Y chromosome DNA testing, it is possible to discover where and when your ancient ancestors originated, and retrace their genetic footprints across the globe over thousands of years. You will discover your haplogroup (think of a haplogroup as your ancient ancestral clan), your own specific sub-type and personal genetic signature.

Mitochondrial DNA testing: By identifying DNA markers using mitochondrial DNA testing, it is possible to discover where and when your ancient ancestors originated and retrace their genetic footprints across the globe over thousands of years. You will discover your maternal haplogroup, your own specific sub-type and personal genetic signature.

Your fatherline and motherline test are an important and significant part of your ancestry but there is much more for our test to unravel: the AllmyAncestry part of this test will tell you what percentage of your DNA comes from different regions from around the world and detail how much of your DNA is for example, African, Jewish, or Native American. This test traces your ancestry thousands of years back and results include a personalized map where you will be plotted and compared to the many reference populations in the database. Your DNA will also undergo what we call “chromosome painting” which essentially gives a colour to your chromosome segments. A different colour is given depending on what part of the world that segment originated from – you will have a colourful map that will show how much of your DNA is African, Asian, Native American etc.

Note: the further back we go in our family generations, the less DNA we share with our ancestors from that generation.  The amount of DNA we share prior to our great-grandparents is almost negligible which means that this test will highlight the part of your ancestry which is determined by the past 3- 4 generations.

Most men eventually go bald but some go bald earlier in life than others. The main factor affecting baldness is genes. The likelihood of you losing your hair is down to your genotype (a set of genes responsible for a particular trait). So how will this aspect of our test help you?  With this test we can estimate how much of your hair you will have lost by a given age with results establishing whether you are:

The test is based in analyses of the two most well know markers with the strongest association to male baldness. We test both the variant found on the Y chromosome and on the X chromosome.

Whilst baldness is of no concern if you are a female taking this test, it is nevertheless useful to you. Why? Because this test can tell a female how likely she is to pass on the baldness gene to her kids. Males who know they are at a high genetic risk can opt for a range of treatments that can significantly slow down the rate of hair loss or even stop it.

Blue eyes are very common amongst the British. Interestingly we know that blue eyes originated from a single ancestor, some 10,000 years ago – somewhere in the Baltic area. If you have blue eyes, then you descend from this person. In this test we look at your genotype (a section of your DNA that codes for a specific characteristic) and:

Red hair is associated particularly with people in the British Isles, with Scotland having a particularly high percentage of its populations being red heads. Red hair is genetic and is the rarest possible hair color. Just around 1-2% of the world population exhibit this trait – it is even rarer if you have both red hair and blue eyes.  Red hair is a recessive genetic trait caused by a series of mutations in the melanocortin 1 receptor (MC1R), a gene located on chromosome 16. It is a recessive gene which means that offspring will only be red heads if both parents carry the gene. If you carry just one variant of this gene, then you will unlikely have red hair but you could have red haired children if your partner also has a red haired gene variant.

So having established that red heads are quite a “British” phenomenon, why take this test? Well wouldn’t you want to know if you carry one or more of the red hair gene variants? Wouldn’t you like to find out whether you and your partner will have a child whose hair colour is the rarest in the world?